Nutcrackers from the Erzgebirge

Nutcrackers are as much a part of an Erzgebirge Christmas as stollen. They are still fashioned in local workshops just as they were in the past. About 130 individual steps are needed to make one of these figures. They are made almost exclusively from native woods such as spruce, beech, alder and lime. The beards of high-quality nutcrackers are usually made from rabbit fur, and their accessories are often made from leather and fabric. 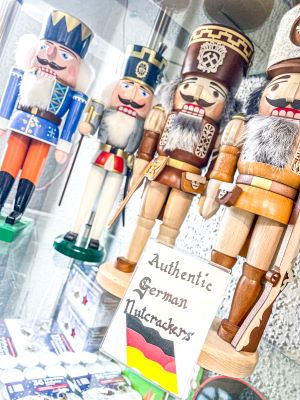 Nutcrackers are first and foremost decorative items. But larger models are certainly able to crack nuts. If you do this too often, you must accept that they will show signs of use. Smaller nutcrackers are definitely not designed for this purpose.

The History of the Erzgebirge Nutcracker

The first nut-cracking figures appeared in Berchtesgaden around 1650, and then in Sonneberg from 1735 onwards. The first Erzgebirge nutcracker came into being in the small workshop of Wilhelm Friedrich Füchtner in Seiffen. Here, in the second half of the 19th century it was dressed as a king. Those that followed were also modelled on figures of authority. Gendarmes, kings, soldiers and hunters were produced, all with very stern expressions. They can be seen as a sly dig at the powers that be. The working population on the other hand was immortalized in the form of incense smokers.

Today nutcrackers are found in many different forms.